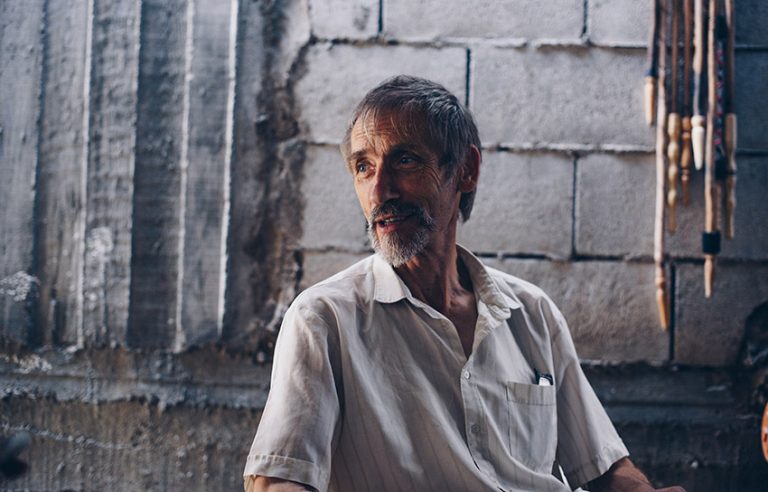 What Is Aleppo Soap? (EXPLAINED)

If you don’t know what Aleppo soap is, then it’s my honor to introduce you. From its mysterious history and counterfeit scandals, to its shower longevity and prowess as a shaving soap, it’s a bathroom product worth acquainting yourself with.

What Is Aleppo Soap?

Aleppo soap is named after the city in Syria, where it was popularized thousands of years ago. It’s true origins are unknown, but its ingredient formula has held strong over millennia.

You might know it for its distinct, rich brown color, with an emerald green inside. Aleppo soap is incredibly dense, so when you first pick up a bar, you might be surprised by its weight. Nonetheless, it still floats in water – that’s how you can check if someone is selling you a genuine, honest-to-God bar of Aleppo soap. Most soaps don’t float. (And Aleppo soap counterfeiting is on the rise!)

Why Is Aleppo Soap Good?

Well, for one thing, Aleppo soap has stood the test of time. When it comes to customer satisfaction, buyers have been giving it five stars since around 300 A.D.

But beyond that…Aleppo soap is just so authentic and simply made. Modern commercial soaps are packed with chemicals and artificial preservatives. The industrial skincare complex has been pushing poorly made, cheap soap for so long that we, as soap users, have forgotten the value of a basic, all-natural, long-lasting bar.

So if you find yourself shocked at the high quality ingredients and feel of a bar of Aleppo soap…that might be partially the case because you’ve been using crappy commercial soap for far too long.

What Is Aleppo Soap Made Of?

As an essential oil, bay laurel has some unique medical benefits. It relieves pain, repels insects, regulates menstrual cycles (life hack if you have a female significant other), promotes hair growth, and helps heal damaged skin. Add that to soap, and you get a bar with some gentle medicinal properties, alongside its cleaning abilities.

Is Aleppo Soap Good For Skin?

I’m going to put this disclaimer upfront: bay laurel is a fairly common allergy, and it’s one that lots of people don’t realize they have. So, for the love of the soap gods, patch test Aleppo on your skin before you rub it all over your body and face.

As long as that patch test comes back clear, Aleppo soap is going to be great for your skin. It’s hypoallergenic, antiseptic, antifungal, moisturizing – you name it.If you’re a natural soap connoisseur, you have to get yourself a bar of Aleppo at some point. I think it might be one of those unspoken requirements.

Is Aleppo Soap Good For Face?

Aleppo soap is an excellent facial mask. Unlike other soaps, commercial or natural, you can leave the suds on your skin and let them work for a few minutes. Once it dries, rinse it off for soft, supple skin. (Again, don’t do this with other soaps. Aleppo is special in this regard.)

Aleppo soap is also a high-end, popular shaving soap. It gives your skin just the right texture for the blade to glide. Plus, like all natural soaps, it’s good for toning, cleansing, and giving your skin that vibrant finish, so it’ll do a lot more for your face than that can of shaving cream.

How Long Does Aleppo Soap Last?

Another one of Aleppo’s unique properties: it lasts for years. The curing process (letting a freshly made bar of soap rest and condense) takes at least seven months, though most Aleppo soap makers often wait nine months to a year. Compare that to your average bar of natural soap – most take four to six weeks to cure.

Lots of natural soaps also come with an expiration date. The bar won’t be unusable after it has “expired,” but it might not keep its nice fragrance or skincare properties. Natural bars with plant material might wilt.

On the contrary, Aleppo soap only gets better with age. It dries and changes color naturally as it grows older, developing a rich brown “crust” from the outside in.

And, best of all, Aleppo soap won’t lose any of its skincare properties as it gets older.

But I wouldn’t recommend it as a hand soap, if that’s what you’re trying to get at here. You’ll get the most use and value out of it as a facial and body soap (or even a hair soap). Sitting a bar of Aleppo soap sink-side feels…wasteful, in an almost blasphemous kind of way. Seems like the kind of crime soap gods would punish somehow.

And, as a disclaimer, all soap is effective at washing away germs. You don’t need to shell out extra for the “antibacterial” marketing sales pitch. Look for natural soaps with skin and health benefits, rather than having the antibacterial label be your end all be all.

Aleppo soap typically has an earthy smell. Lots of people say it reminds them of rain. It might be a little big pungent when you first take it out of the packaging, but don’t worry. Once you rinse the lather off your skin, it leaves behind a clean, light smell.

I wouldn’t necessarily describe it as a manly scent, but it’s gender-neutral and fresh. You can’t go wrong with that!

Is Aleppo Soap Good For Acne?

Aleppo isn’t known as a heavy-duty acne soap, but if you’re currently using store-bought bars, it’s going to be a hell of a lot better than whatever you picked up off the shelf at Walmart.

Really, almost any natural soap is a good choice for acne. I usually recommend the nice medicinal benefits of Moringa soap if your acne is really plaguing you.

But that doesn’t make Aleppo a bad choice as a facial soap. It’ll cleanse and tone just like any other natural soap. For those who are having a really hard time with pimples and zits, there just happen to be more heavy-duty options out there, other than Aleppo.

Patch test Aleppo soap before you use it. We mentioned this earlier, but bay laurel is one of those common allergies that lots of people don’t realize they have.

Most of Aleppo soap’s negative customer reviews come from people who woke up with a full-body rash the night after they first used the soap…because they didn’t patch test it before rubbing it all over their body.

So, as a general rule, if you’re ever going to apply a new product to your body (especially your face), test it out a little bit on your arm first. That way you don’t have to be the foolish angry person on Amazon leaving a nasty review because they made an avoidable mistake.